Rhinoceros: This is a powerful beast with a tough hide, that would only be made more dangerous by superpowers.

Platypus: This is certainly one of the most dangerous monotremes out there. Poison spurs, agile in the water.

Panda Bear: If you have to ask, you really should reread black and white animals.

Komodo Dragon: The word Dragon is such an evocative word that I simply had to chose it.

Hornet: This video should explain my choice
http://www.youtube.com/watch?v=JDSf3Ksh ... re=related
by strawman

They should have had "Ride of the Valkyries" for the soundtrack for the beginning of that vid. (Beach scene, Apocalypse Now) Are we talkin' Tehtix here?

by confusedgreen
Tanuki--because he has bigger balls than you do.

Owl--their eyes may be immovable, but all they need is to turn their head as they pick yours clean

Jelly fish--I heard the best way to cure a sting is to get peed on, and no one wants that.

locust--cause god sent them here to fuck shit up.

frogs--slippery pricks, can't catch them, but I heard they can give you HPV.
by delfedd
Oh definitely.

adam wrote:
3. Boar- i'm not sure why but this species has really earned a name for itself in the drabblecast community, and i think that warrants a spot on the roster. Hogzilla has the makings of a pretty sweet megabeast, as long as one of his opponents isnt "9 year old with a pistol."

Let's not forget that they can kill humans by blowing their own brains out!

cammoblammo wrote:Let's not forget that they can kill humans by blowing their own brains out!

Too true: maybe a power for Hogzilla 2.0 is to blow brain mist out of his nose (at the loss of minor IQ points).
by strawman
Y'know, if the germs had been smart in War of the Worlds, they would have done like the parasitic fungus does with the ants, and forced the Martians to destroy the Lysol factory.

Give a germ a fish, and you've fed him for a day. Teach a germ to fish...
by LajesticVantrashellofLob
Bee: Because it probably has Tehtix. And if not, I'm picturing a swarm of bees with lasers for stingers.

Orca: Speed, ferocity and lots of blubber. What's not to like?

Puma: Vicious claws and a bite attack? Add in some steel plating and a photonic cannon and we've got one AWESOME megabeast...

Shark: The orca's mortal foe. Should have three heads.

Velociraptor: As a long time xkcd reader, I think this choice speaks for itself.
by Mr. Tweedy

Also, if the raccoon does get picked we gotta give it the ability to fly. It would explain so much about the Mario games
by Mr. Tweedy
That's actually Tanuki Mario. Raccoon Mario is a distinct suit.

Raccoon Mario flies. Tanuki Mario shape-shifts. It's only fair that a mega-tanuki-raccoon-beast should get both. 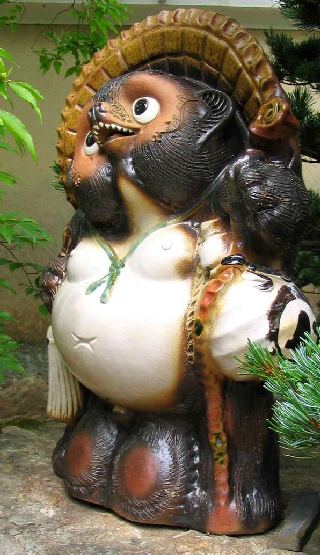 This is more the kind of Tanuki/Raccoon I had in mind here. Less happy plumber, more twisted features, culture shock, and swollen testes.
by normsherman
Dear lord if that thing isn't from the very bowels of hell I don't know what is.
by anadrea
In no particular order.....

Slug/Snail - I can imagine something cool happening with that icky slime trail they leave, and the snail already has sweet armor

Panda - For as cute as they are, they've got some mean claws

Jelly Fish - I'm personally most afraid of these guys after hearing horror stories from friends who have brushed against or stepped on them on the beach.

Very excited about this competition

I was a little too late to Drabblecast to participate in the first one.
by Spharv2
Armadillo, Hyena, Komodo Dragon, Platypus

I would also like to throw in a vote for the vicious LEMMING! Can you imagine a pack of little suicide bomber lemmings?
by tbaker2500

I would also like to throw in a vote for the vicious LEMMING! Can you imagine a pack of little suicide bomber lemmings?

Ha ha! That's awesome! Is it too late to change my vote to Lemmings?

I would also like to throw in a vote for the vicious LEMMING! Can you imagine a pack of little suicide bomber lemmings?

Ha ha! That's awesome! Is it too late to change my vote to Lemmings?

I wouldn't think so. Just go back and edit your post.* Reality control, baby.

*Unless, of course, someone already quoted it, in which case the cosmos will be unbalanced.

The Manatee would just serve us right. We have carelessly slaughtered them to near extension with boat propellers. Their primary power should be psionics.

All along they have had the ability to literally blast the minds from careless boat captains before the vicious boat propellers even got close, but due to their Buddhist like philosophies, they are vegetarians after all, the manatees have always abstained from harming any other animal including man. That is until now…

by StalinSays
I like the psychic manatee angle - just needs a cheezy pun or bizarre syllable tango of a name to seal the Mega-Beast deal. Psi'cow? Mind'atee? Nugong? Any ideas folks?

StalinSays wrote:I like the psychic manatee angle - just needs a cheezy pun or bizarre syllable tango of a name to seal the Mega-Beast deal. Psi'cow? Mind'atee? Nugong? Any ideas folks?

Well, the order including manatees and dugongs is Sirena, collectively Sirenians; apparently some very lonely sailors thought they were mermaids once upon a time. So maybe some play on Psirenian?
All times are UTC+01:00
Page 2 of 4
Powered by phpBB® Forum Software © phpBB Limited
https://www.phpbb.com/