I didn't even have to quirk up the title, just went with the BBC's choice, straight up. 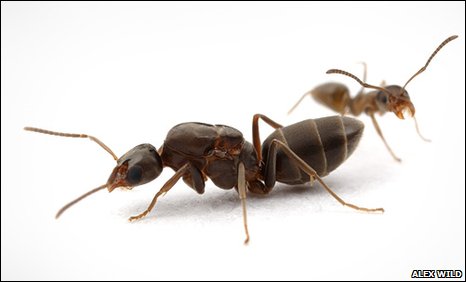 I'm not alone in being terrified by this, right?
Top

Impresses me once again with how little we actually understand about nature and her subtle ways.
Advertise in this space!
Top

Impresses me once again with how little we actually understand about nature and her subtle ways.

Only one thing ya needs to understand: They're evil. And they're out to get you.

Only two things ya needs to understand.
Never judge anyone until you have biopsied their brain.

The colony may be the largest of its type ever known for any insect species, and could rival humans in the scale of its world domination.

Okay. Everybody take one ant and squeeze. That'll solve this issue!
We must do this, before they figure out how to kill a human by blocking our airways or something. It's us or them, people!!
I'll be there in 5 minutes. If not, read this again.
Top

Re: Ant mega-colony takes over world

StalinSays wrote:I didn't even have to quirk up the title, just went with the BBC's choice, straight up.

Coolio! Ants will someday take over just like the Borg.

As far as Hoppy goes, I love how the news reporters made a big deal about a cat that acts like a cat. And the pansy grown man that was "forced to the ground" by a 19 year old cat? He needs to grow a couple, what a disgrace to humanity.
Raise your fists and scream "black smut"!
Top
Post Reply
7 posts • Page 1 of 1