As she turned to me with a vacant, gentle smile on her lips, I fought to suppress a start. As a boy, I used to climb with the others up the Frias Peak. Sometime we found balls of bubbled rock which, upon being cracked apart, would prove to be hollows full of crystal. Those were her eyes. The sockets were two cups filled with crystal shards.

Drabble - Please Allow the Door to Close by John Medaille

Samantha Henderson
by DKT
That was fantastic. Chilling in a subtle way, and introspective. I loved how it tied in so well with Van Gough's picture. The images at the end were great.

I'm a big fan of Samantha Henderson's -- I've read her novel Heaven Bones, which has a different form of angels in it. Angels made from the bodies of murdered women. It's pretty gory and disturbing, but it's also elegantly written. Plus there's a pyschic cop, an insane doctor, and sentient fog.
by strawman
That's one big elevator. But in a sense, we are all of us on a big metaphorical elevator, so it's not hard to see where the author got his idea for the Drabble.

Starry Night was a bit Trekkish for me. It's an unfortunate coincidence for the point of the story that the headline news is about the 8 year old boy who murdered his father and another man. Or maybe he was hoping to turn them into precious stones... The idea that youth = innocence is a flat-out, bald-faced fiction. But after all, flat-out, bald-faced fiction is just another name for Drabblecast. Also, the Magisteri I know woulda run like hell.

Great points for background music, Norm. I sure would love to look over your shoulder while you put together one of your podcasts.
by Mr. Tweedy
I'm going to take what I'm sure will be the minority viewpoint here and say I really didn't care for this story. It sustained a otherworldly atmosphere primarily because of the good production–especially the excellent background music–but I really feel like the story itself fell pretty flat. As we've seen in Drabblecasts past, vagueness can be a great asset to a story if it's used well, but this story was clumsy with it.

We have a lot of very specific details about the geography of the setting, the government, the standard of living, even the seasonal occurrences in the fantasy world, enough to let us know with great certainty that this is not Earth. But then we have almost no information about the "angels" that are the story's real focus. What are they? What are their motives? What, exactly, do they do to people? What, exactly, is happening at the end of the story? How do they fit into the larger cosmology of this universe? Did they have anything to do with Simple's baby? To me, the choice of what to be vague about left the story feeling lopsided. We have an interesting and detailed universe as the beginning and an obscure threat at the end. I wasn't creeped-out by the angels, just sort of confused.

I think what I'm clumsily trying to get at is that this story never establishes a baseline for what "normal" is. If the angels had visited New Jersey and turned people into ash, we'd understand that this is a very strange and scary because we understand what "normal" is like in New Jersey. But this world has second springs and arcane fires. What is normal in it? I don't know. Do these angels have a religious significance to the people? Are visitations by ethereal beings rare? Are crystals significant in this world? Do yellow eyes mean something? Is there some kind of doomsday prophecy in their religion? I need this sort of context to "get" the story, I think.

So, between the vagueness of the angelic threat(?) and the lack of context for it, I feel like the story was basically just a lot of stuff that happened. It happened in an unusual place with some colorful scenery, but it didn't mean anything to me. ...Kind of like "Howl's Moving Castle."

The drabble I loved. The dark absurdity of the people in the elevator reverting to savagery instantly when their cell phones turned off made me smirk and chuckle. It was just like that scene from the Simpson's where the power goes out and the people of Springfield instantly start to riot. It was a clever sarcastic jab at both our psychological dependence of technology and our distrust of one another, and quite funny. Thumbs up.
by Goldenrat
I thought both Starry Night and the drabble were good. I liked how eerie and creepy Starry Night felt. I was constantly thinking to myself 'WTF is going on?". It kept my attention throughout. I liked the fact that I never really figured out what exactly the angels' motives were or why they showed up in the first place. It stayed on my mind well in to my workday.
by tastycakes
I could see this as a movie where David Bowie plays all the parts. Kind of similar to what Eddie Murphy does in all his films nowadays. What do I mean by that? Well, think about any movie in which David Bowie appears... weird, right? Yeah, so this story was uber-weird, and yeah a little vague, Mr. Tweedy, but it had that Bowie-ness which to me is a soteriological effect. Am I comparing David Bowie to Jesus? Why not? And in the comparison, I prefer the former.
by Mr. Tweedy

tastycakes wrote:Am I comparing David Bowie to Jesus? Why not? And in the comparison, I prefer the former.

Hmm... Well, Jesus only ever had two jobs: Carpenter and Messiah. Wikipedia says Bowie is a musician, actor, producer, and arranger. So, while one could argue Jesus' job was ultimately more important, Bowie has Him beat for career diversity.

by cammoblammo
I'm going to agree with Mr Tweedy more or less: I liked listening to the story, but it was probably more for the production than the story itself. There were just too many questions unanswered. The same story in a longer form may be quite a treat.

That leads me to wonder how good Ms Henderson's novel is. I might just have to pay a visit to Amazon.

And that Simpson's episode you referred to, Mr Tweedy: I hadn't seen that in years, until it popped up on the telly tonight.


Mr Tweedy wrote:Hmm... Well, Jesus only ever had two jobs: Carpenter and Messiah. Wikipedia says Bowie is a musician, actor, producer, and arranger. So, while one could argue Jesus' job was ultimately more important, Bowie has Him beat for career diversity.

Well... those four jobs are fairly closely related to each other. If we mean 'record producer' then 'musician' and 'arranger' are pretty well implied anyway. And Jesus was a 'tekton,' which implies he was a general artisan, and possibly even a designer and architect. So the Bowie comparison might be better tah first thought.

Oh, and proof that if you can imagine it, someone's already put it on the internet: 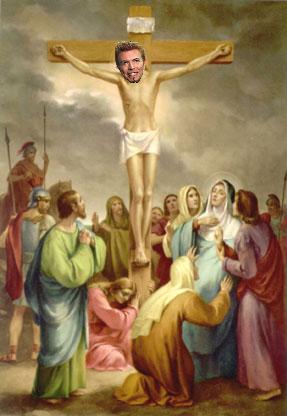 by StalinSays
Well, I figured out why the ang'liens smite'orized the adults: Bo is a boys' name. Extreme measures were needed.
by G. E. Lee
Good feature, but great drabble. Very effective use of 100 words. It felt quite a bit longer than that.
I was also pretty impressed by the production in the feature. Where did Norm get the background music?
by normsherman
yah, I've gotta say that was my favorite Drabble of all we've ever done.

Music was a mix- opening was from "anonymous" entitled Norwegian Folk Music in podsafe music network. The middle was all either ambient filler music from a background music CD that I cut and pasted, or stuff I did on my keyboard.

Last was "Between Earth and Sky" from an album of the same name from a Baltimorian I had a bouzouki lesson with named Robin Bullock. Good album.
by LajesticVantrashellofLob
I would give my left hand to see more stories like this on the Drabblecast. This is one of my favorite episodes, despite numerous flaws. I listened to this while walking my dog, and I actually stopped dead in my tracks at some of the exceptionally strange parts. The story was also very well produced and the length served it very well, with time to develop a feel for who the main character was.

On the other hand (that would be my right, in this case), there were a few too many unanswered questions at the end. The "colors of sin" bit felt a bit too much like it was tacked on at the end to add meaning to an otherwise brilliant piece. The "angels" appearing at the end was very predictable, and I disagree with the main character's decision to simply suffer the fate the angels had in store for him.

Those flaws were relatively minor in comparison to the piece's majorly awesome strong points, though. I normally hate stories with unanswered questions, but the piece was awesome enough to make me like it anyway. I look forward to more awesomeness next week!

by DHeath
I found myself just going along with the story, instead of looking forword to guess what will happen. It wasn't until the end that I realzed that I enjoyed myself. And that seems to be the point of stories.

It was simple and easy to fallow without being boring.
by Talia
Was rather bummed out by the story, but that's the effect all apocalyptic-type tales tend to have on me. Those angels sounded like a bunch of jerks to me. All those kids aren't exactly going to do very well all by themselves. :p

Liked the concept a lot.

And yeah, the drabble was quite well done. I was half expecting it to end with rescue and it'd turn out they'd only been in there like 30 minutes or something. ;p
by Mr. Tweedy

Talia wrote:And yeah, the drabble was quite well done. I was half expecting it to end with rescue and it'd turn out they'd only been in there like 30 minutes or something. ;p

I had the impression it was supposed to be more like 3 minutes.
by strawman
Now we know why those signs say, "In case of fire, use stairs".
by tbaker2500
That was funny, Strawman.

Story was fine, a good baseline drabblecast. The production, however, scared me a bit. The fact that I was sucked that deeply into a story I'd otherwise bypass, makes me wonder if Norm is setting us up for mind control.
by McToad
Creepy story, it had me going for a while.

However, I found the opening dull, the world building too vague leaving no sense of a real place, and the ending unsatisfying. The main reason the ending didn't work is that it implied a people being judged with no path to or opportunity for salvation... ie: all adults will sin and be transmogrified with no understanding of how to avoid of this fate and no way to mitigate the punishment. When something is so absolute and inevitable, then there is no hope and thus no real compassion for the characters and for me...no story, just the inevitable grind of the machine they call fate.

by sandrilde
I think I wanted a better/different story payout than this one had. The initial mystery intrigued me, but I wasn't satisfied by the end.
All times are UTC+01:00
Page 1 of 1
Powered by phpBB® Forum Software © phpBB Limited
https://www.phpbb.com/