Page 2 of 2
by normsherman
WHOA. freaky....Halloween story about to be posted this week as well on DC. Happy uhm...March.

That story is tight. Nice pumpkin squid!
by Kevin Anderson

Kevin Anderson wrote:Please don't make fun of the shirt. It was a gift.
http://www.sniplits.com/

Dude, how old are you? You look like my dad.

Your dad is an extremely handsome man. He should button up the shirt though.

tastycakes wrote: Tasty, indeed. I think I've got a spot directly over my bed so they are the last thing I see before sleep and the first thing I see waking up.

Great, the last thing we need is a wild, untamed romance between an editor and moderator. These things always end messy.

Don't even go there Kendall.
by Mr. Tweedy
Sorry, Kendall. The men in the Tweedy clan are all happily taken... by women.

Now those Sweedy folks; those people are an entirely different matter.
by tbaker2500
Great story Kevin! Thanks for letting us know. I'm honored to be the builder of the house!

I see that this story was creepy and entertaining throughout, with a minor punch at the end. The other stories of yours the high-art DC editors accepted have been somewhat normal until a solid punchy twist at the end. I think I now know what the editors (you know who you are) are looking for in this Halloween's episode.

by Kevin Anderson
Thanks Tom. DC was on my mind when I was writing the first draft, and honestly, I didn't realize I'd used your name until Norm pointed it out. 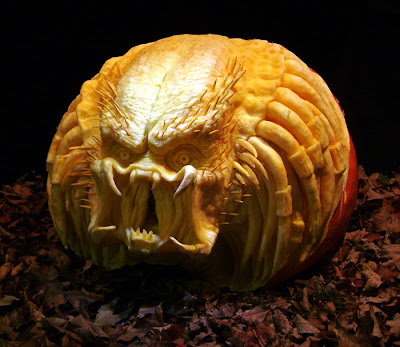 ...could be the most awsome Jack-o'-lantern of all time.
by Mr. Tweedy
Doesn't it have to contain a candle to qualify as a jack-o-lantern?
by Kevin Anderson
Yeah, you're probably right.
Okay, this one then.

by tbaker2500
I don't know if this means much, your stories are the only horror I read/listen to/watch. I'm not a big horror fan, but your pieces have always been enjoyable. And Pumpkinseeds is one of my favorite DC's ever.

So I'm just hinting to the editors that I wouldn't mind more of them...

But this leads into- why are disembodied children's voices so creepy? I know they talked a bit on the dunesteef about this, but I'm not quite convinced. I know that if I hear and adult's voice, I feel like I can take it on. Machismo and whatnot. But that child's voice, really pierces down into the amygdala.
by Mr. Tweedy
Kids as a threat are scary because it's irrational. Children are weak and naive, and we have an instinct to protect them. So when you see or hear a kid doing something threatening or saying something ominous, it messes with your head. Kids aren't supposed to do stuff like that. It's unnatural.

That's why killer little girls like Samara and Alma are so freaky: Because it's unreasonable that a little girl could be that dangerous. If something doesn't obey to rules of logic and physics, then you can't predict it and you can't fight it. It makes you feel confused and helpless. Hence, a doe-eyed little girl who can melt your face off by looking at you is much scarier than a flaming demon who can do the same thing. The later is expected. The former messes with your head.

by Kevin Anderson
Sheriff Kinkade makes another appearance over at the Dunesteef – The Day Hypnotism Died. The guy just won’t stay dead.

by tbaker2500
Hey, great story! I really enjoy your work.

The only thing that surprised me was at the end, I expected the survivors to be in the zoo, not the mental asylum. But I guess that's more of a drabblecast ending.

by Unblinking
Ah, the Drabblecast Halloween tradition begins! And a good creepy tale to begin it with. I always knew my fear of jack 'o lanterns was entirely rational, and finally I have proof!

by sandrilde
Good story and awesome production values. Fun stuff! Really enjoyed this one but based on the pages of comments, I was not alone.

by Varda
What an awesome Halloween story! Great production values, hilarious intro/outtro, and if I'm correct, it seems to mark the first appearance of Norm's "Batman" voice, as well as his Cryptkeeper voice. At least as far as I can figure.

My only complaint is that the outtro promised me a picture of a facehugger jack-o-lantern, and the actual episode artwork's a freaky pumpkinhead dude. Bait and switch! Time to file a report with the Better Business Bureau... unless someone can pony up that facehugger pumpkin.